Research and Innovations 11 January 2019
One of the world’s oldest and most reputable publishing houses BRILL/NIJHOFF (Leiden, Boston), founded in 1683, has published a monograph by a UTMN professor Sergey Marochkin  — “The Operation of International Law in the Russian Legal system. A Changing Approach”. The book addresses the increased role and standing of international law in the Russian legal system through analysis of judicial practice since the adoption of the Russian Constitution in 1993. Sergey Marochkin explores how methods for incorporating and implementing international law have changed over time, influenced by internal and global policy.

The research is based on the analysis of Russian judicial practice and particularly doctrine, rule-making and law enforcement activities over a 30-year period. 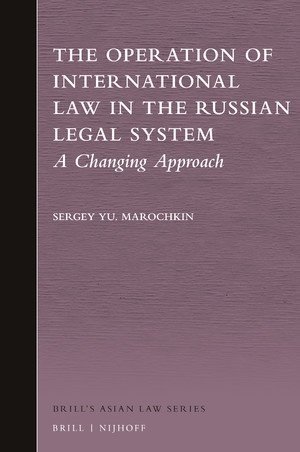 There are numerous references to UTMN and Tyumen region in the text, moreover, Sergey Marochkin reflected on his own role in the legislative activity of the region.

The final sections of the book are the most illustrative, examining how 'the rule of law’ remains subordinate to ‘the rule of politics’, both at the domestic and global level.

“The Operation of International Law in the Russian Legal system. A Changing Approach” is a continuation and development of a monograph published in 2011, which was awarded the F.F. Martens Prize of the Russian Academy of Sciences in 2013.