14 November 2018
University of Tyumen joined 5-100 Project 3 years ago. UTMN main strengths were the roadmap that promised fundamental transformation of the university and the support of the Tyumen’s governor.
A meeting of the Council on Competitiveness Enhancement of Leading Russian Universities took place at the Immanuel Kant Baltic Federal University in Kaliningrad. For 2 days, on 26-27 October, 21 universities participating in the 5-100 Project presented their results and development plans. Following the meeting, the Council will work out some proposals for the universities on updating their roadmaps.

Before the Council meeting, Mikhail Kotyukov, Minister of Science and Higher Education of the Russian Federation and Deputy Chairman of the Council, noted that “Project 5-100 is not only aimed at advancing Russian universities in the rankings, but a new impetus was given to the whole Russian higher education system, it provides for increasing its competitiveness and its integration into the international scientific and educational space, having built a group of leading universities.” He also added that the expertise of Project 5-100 universities is a key resource for all institutes of higher education, and that their best practice in terms of transforming into the world's leading providers of education services and research is expanding to all Russian universities.

At the International Council meeting, UTMN was represented by a delegation guided by the Rector Valery Falkov.

In the report for the Council, UTMN representatives focused on the development of strategic academic units – School of Advanced Studies and X-BIO Institute of Environmental and Agricultural Biology, transformation of education, infrastructural changes, and partnerships with industries and regional government.

University of Tyumen joined 5-100 Project 3 years ago. UTMN main strengths were the roadmap that promised fundamental transformation of the university and the support of the Tyumen’s governor who announced the centrality of the university for the regional development.

For the University of Tyumen, entering 5-100 Project meant the green light for its ambitious plans to transform from a regional university to one of the leaders of Russian university system. This means bringing education, research and innovation to the international standards and providing resources much needed to diversify the economy of Tyumen region and help both develop its oil and gas industry and create new industries.

For three years, the university has been doing this with support of the 5-100 Project, the local government and several Russian corporations.

The transformation of the university involves both creating new strategic academic units and developing existing academic units to bring them to the world standards.

When School of Advanced Studies was opened one year ago, it had three main goals.

Firstly, the university needed a testing ground to develop new formats of research and education before they are transferred to the rest of the university.

Secondly, the university needed a space where the norms of work of both faculty and students are set high and serve as a benchmark for other institutes.

Thirdly, the university needed an educational establishment, which will attract best students from Russia and abroad, who would otherwise go to Moscow or St. Petersburg and whom regional economy needs pretty badly.

School of Advanced Studies is already the most international institution for undergraduate education in Russia, which offers seven majors and has 5 multidisciplinary research teams. ¾ SAS professors have PhDs from the top-100 universities.

The School’s main challenges are to develop IT and life sciences dimensions of its research and education agenda; launch research-centered MA and PhD programs that will function as international labs where students will work at the projects commissioned by local, reginal and federal stakeholders. 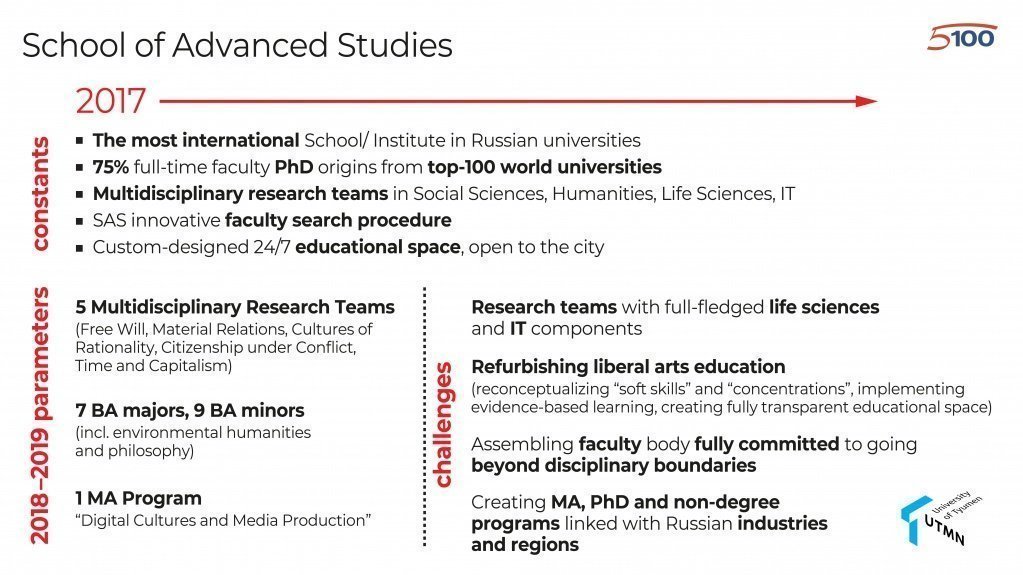 The second strategic academic unit is X-BIO Institute of Environmental and Agricultural Biology. The Institute is aimed to concentrate the university’s existing potential in natural sciences in the direction which has practical applications in agriculture. This direction was chosen based on the University’s world leading positions in acarology (it is number 5 in the world). On the slide you can see the list of X-Bio research groups.

In 2018, X-BIO has opened its first international English-language MA program “Plant Biosecurity”. The program has a strong export potential and will be continued with a relevant doctoral program. 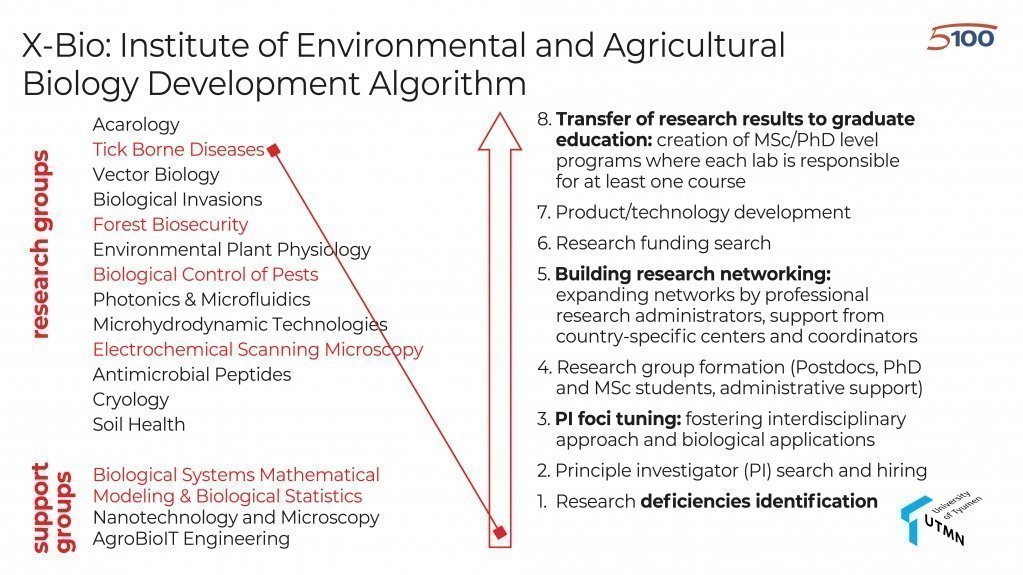 One more field for transformation is undergraduate education. The university developed a set of educational formats that guarantee both the individualization of educational trajectories and what has been called ‘the new fundamentality’. With the implementation of the new model, our graduates will be much more efficient in the labor market and will provide our companies and corporations with the labor force they need.

By now, the new model of undergraduate education affects 35% of the university’s first-year students and 40% of its full-time faculty. The new model involves radical change in educational management and for the first time creates a common educational space across departments and institutes.

For the faculty, the new model means competition, external expertise and attention to student demand – all important factors for faculty development. For students the model creates a lot more individualization and moves them from the traditional position of objects of education to the position of the subjects of learning. 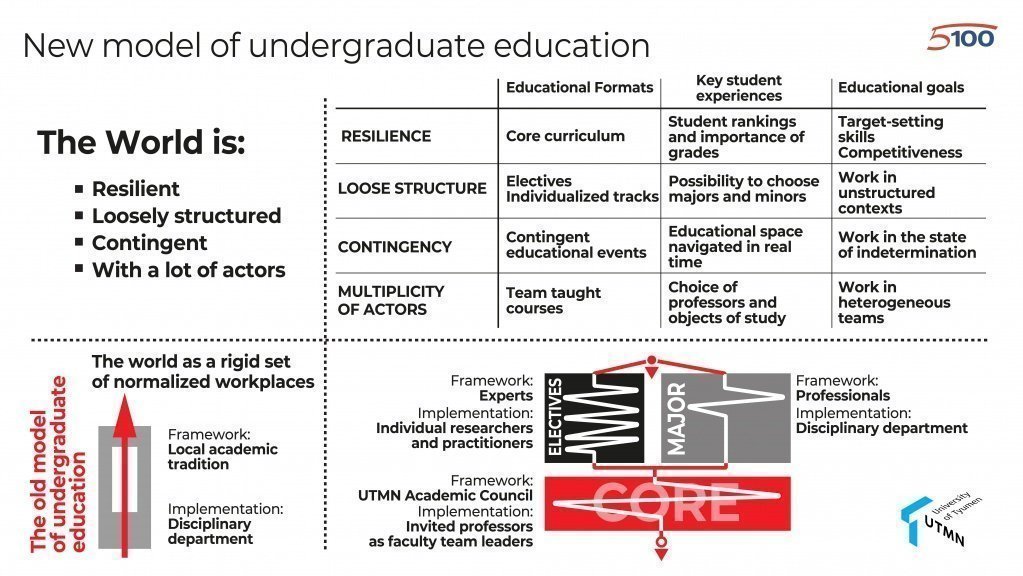 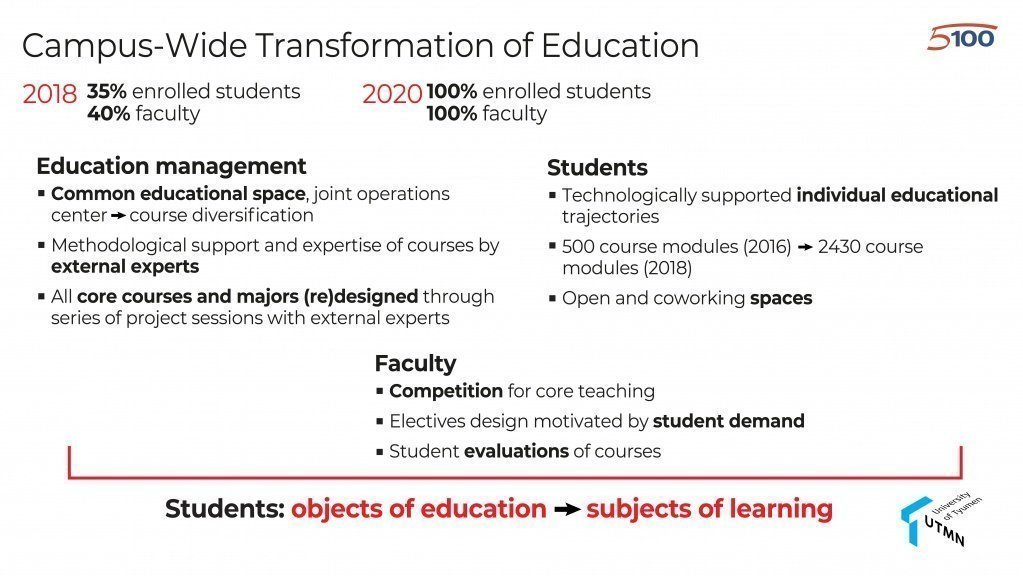 The university would not be able to transform so quickly without the support of its partners. Working with the strong the university becomes stronger itself. UTMN gets faculty from world best universities to transfer knowledge and skills, develops mutually beneficial collaborations with partner universities and institutes of the Russian Academy of Sciences, does R&D projects for leading Russian corporations, trains students to work for them and receives donations in return.

A new professional MA program of the School of Advanced Studies and the Institute of Social Sciences and Humanities, Digital Culture and Media Production, is an example of UTMN’s cooperation with industries as it is tailored to the needs of the regional media industry.

UTMN also established partnership with Gazprom Neft, which covered 2/3 of the cost of the reconstruction of the building that houses the School of Advanced Studies and Polytechnic School. This donation demonstrates their appreciation of UTMN programs that aim to provide the education the company needs for its future employees. 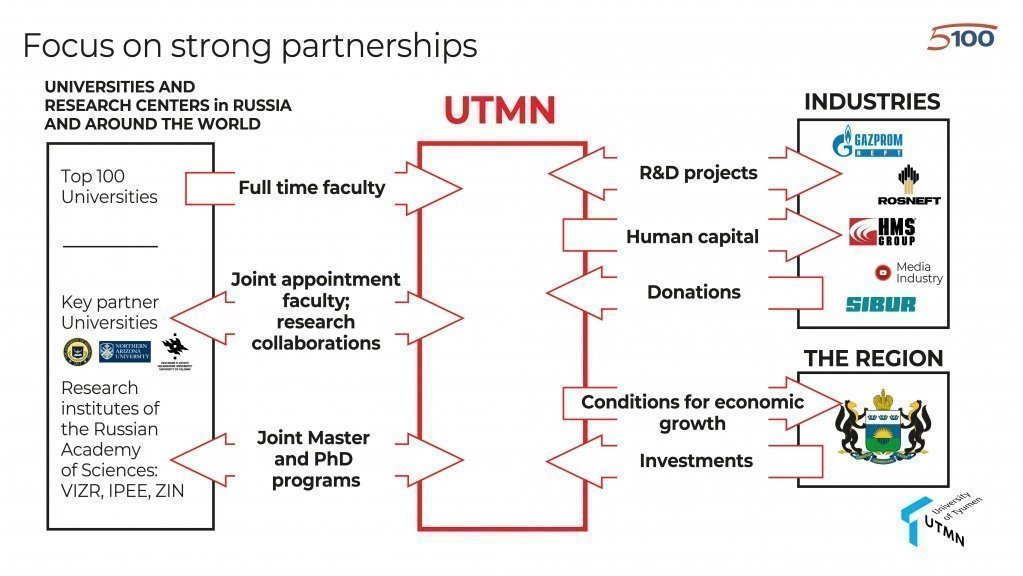 To conclude, the speaker mentioned UTMN infrastructural changes that have already been highly commended by the Minister of Science and Higher Education of the Russian Federation, Mikhail Kotyukov, during his visit to the Tyumen region in August 2018.